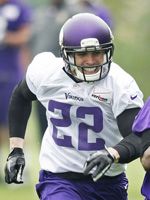 I try not to start threads, but I see no one has open this thread yet.

This game feels like a 2019 Packers vs 49'ers game. No matter how good the Packers were, they just did not match up well against the Niners that year.

I just don't feel Spielman and Zim put the right team together to beat the Cardinals. The Vikings defense is a vet heavy (Read Old) secondary and 2 fat guys playing in the middle. AZ has speedy WRs and an elusive fast mobile QB. This defense is just not built to handle that.

On defense they have JJ Watt and Chandler Jones coming off the edge, but I am more worried about the interior. The Vikings interior OL can make average DTs look like John Randle and Aaron Donald.

My score prediction, the Cards are up by 3 TD going into the 3rd Quarter, and then they allow Kirk to pile up his usual garbage time stats.

AZ's defense held one of the best offenses from last year to the fewest yards per drive of any team in week 1. The Vikings on the other hand, averaged the 29th most yards per drive week 1 against a defense that was not very good last season.

AZ is a very good team and we tend to struggle against those lately. Vikings lose 24-10.
0 x
Top

So for me, the outcome of this game is going to depend a lot less on assuming the Vikings come in as a bumbling, woefully under-prepared team and a lot more on the merits of each team's respective talent level and capabilities.

With that said, the Cardinal offense is predicated in large part on Murray and what he can do with his ability to run and scramble. I don't think Murray is a great passing QB by any stretch. I agree with Stump's take that if you give Murray his first read and allow him to do what he wants to do he's going to look pretty good. So it's incumbent on the Vikings to not let that happen. Murray has a lot of targets in the passing game so you can't sit back and take them all away every play, but you can pressure him with a variety of pass rush looks and switch up coverages post-snap to confuse him, and that's what Zimmer's defense will need to do and do well all game if they're going to slow the Cards offense down.

Of course, if they do that they will have to contend with Murray as a scrambler/runner and that is a tall order because he's very dynamic. If I have to choose whether I concede passing or running yards to Murray I'll take running yards, but if the Vikings defense can remain disciplined on the rush and not allow Murray obvious escape routes when the play starts to break down I think they can reasonably limit the damage he does with his legs.

The Cardinals aren't a great running team. They get the yards, largely on the back of Murray's contribution, but of course if the Vikings make it easy to run they'll run, and they'll throw in runs to keep the defense off balance. Suffice it to say, the Vikings have retain that gap discipline up front to limit both the pass and run options. The Vikings have to stop giving up the big plays for scores.

If the defense plays better I think they can frustrate the Cardinals and keep their scoring down.

The Vikings on offense should expect heavy pressure all day. The Cards have excellent edge defenders on the line and they will be coming all day. O'Neil and Hill are going to be tested. On the interior the Cards aren't as talented or explosive, but they'll try to take advantage of the interior Vikings OL ala what the Bengals did and I'm not sure the Vikings have the talent to stop them. If the Vikings OL can't hold up, penalties and poor execution will be the least of their worries. We'll see a lot of 3-and-outs and a lot of frustrated offensive players starting to emerge before the end of this game if that happens, and as it stands I'd say the odds are around equal that's what we'll see.

If the Vikings OL shows up prepared and motivated and executes well, however, the narrative shifts considerably. If Cousins gets time to set and throw he should be able to take advantage of the Cardinal secondary and maybe hit a few big plays down the field even. Cook likewise can do a lot of damage if the Vikings can open some holes for him. He doesn't need a lot. From a skill position perspective, I like the matchups of the Vikings offense against the Cardinal defense. For that to matter, the Vikings OL has to show up and show it can play at the pro level.

Special teams I'm confident in the Vikings if it comes down to those units.

Cards have the edge because they are at home, but they're high off a big win and could experience a letdown while the Vikings should be immensely frustrated after a bad loss and badly want a rebound.

Because I'm a Vikings fan I'm going to go with the Cards in this one (yeah, I know... Vikings fan logic right there built on years of dashed hopes and expectations), but I think it will be a closer game than people seem to think with the Cards driving late to score and win.

I think it will be close or the Vikings get a surprise win. This team is the George Costanza of football and that's as deep as my analysis goes.

If Vikings win, I would consider it a miracle since Vikings usually do not play well on the road against good teams
0 x
Top

Our injury report is growing.
Anthony Barr LB Knee DNP DNP
Harrison Hand CB Hamstring DNP DNP
Christian Darrisaw T Groin LP LP
Nick Vigil LB Ankle LP LP
Everson Griffen DE Concussion - DNP
Eric Kendricks LB Quadriceps - DNP
Losing Kendricks will be a tough one.
One of the picks I liked in our draft was Chazz Suratt. Of course the kid will need time but I felt it was a pick that they could use against these multi threat QBs. I would like for us to use him in a new type of role like a QB shadow position. Basically were ever the QB goes you go. This kid did play QB and then was moved to LBer so he has a great perspective. He has great movement. When this Murray starts shaking he could get after him. Make that his only responsibility. Lay the wood to him. Make him regret leaving the pocket. Be different. Of course that is my pipe dream and I don't expect it to happen. I have no idea how this game will shake out. Our OL is terrible and nothing can fix it at this point. Just eliminate some of the penalties would be a huge step forward.
Our LT will need help so that takes the TE out of the passing game. JJ Watt is a good player so O'Neil might need help also. We might have to go one WR two TEs and a FB. Plus they are a 3-4 team. I see us banging Cook up the gut early to try and bring them up and take time off the clock and maybe pop one. Back to back road games is hard.
AZ 34-27
0 x
Top

I think Cousins has his stinker game this week. 3 turnovers, off target. Will see the WR's show frustration. It's going to get ugly.

a powerful whirlpool in the sea or a river.

a situation or state of confused movement or violent turmoil.
Top

I don’t like that Kendricks might be out. Our defense really needs him out there. Guy had 15 tackles last week.
0 x

Didn't Kendricks miss the last game against AZ when they were good too in 2015? Probably win that one with him in there so hopefully history doesn't repeat itself.
0 x
Top

Didn't Kendricks miss the last game against AZ when they were good too in 2015? Probably win that one with him in there so hopefully history doesn't repeat itself.

I like the idea of putting Surratt out there and telling him to track Murray and don't let him get past the LOS. He's got the speed to do it, he can cover if they ask him to do that, and it's not like the Cards are going to hit the Vikes with a power run game. Surratt would be an ideal counter to one of the biggest strengths the Cardinals have on offense, and since there is little tape on him, a wrinkle the Cards would be unprepared to face.
1 x
Top

VikingLord wrote: ↑
Fri Sep 17, 2021 11:05 am
Surratt would be an ideal counter to one of the biggest strengths the Cardinals have on offense, and since there is little tape on him, a wrinkle the Cards would be unprepared to face.

I agree completely but I wouldnt be surprised if Zim doesnt do it. He'd rather start Blake Lynch and keep a rookie on the bench. Same shi# different day

0 x
The saddest thing in life is wasted talent and the choices you make will shape your life forever.
-Chazz Palminteri
Top

Think their d line is gonna have its way. Hope to be wrong. Kinda chuckle at the Murray isn't a great arm stuff. No point trying to argue someone's opinion though. He also has the quickest first step I've ever seen in person. He's at full speed in just a few steps when he takes off. If we can minimize his impact their offense becomes pretty predictable. Most of KKs are without someone dynamic at qb.

VikingLord wrote: ↑
Fri Sep 17, 2021 11:05 am
Surratt would be an ideal counter to one of the biggest strengths the Cardinals have on offense, and since there is little tape on him, a wrinkle the Cards would be unprepared to face.

I agree completely but I wouldnt be surprised if Zim doesnt do it. He'd rather start Blake Lynch and keep a rookie on the bench. Same shi# different day

Zimmer won't do it. He'll do what he always does and the Cards know this. He will have both safeties playing deep coverage and act as the last line of defense when Mur bust through the first 2 levels. Thing is he can split those guys or cut to either side from the split and head up field. That's why it so important to get a hand on him before he gets going. Our secondary and without Hendricks or Barr our LBers are too slow to keep up with this guy. If our DL heads up field on the rush he will have room to take off. Will this happen everytime? No. We have some good front line players and they will make some plays on him. Second half on is the bigger problem.
0 x
Top
24 posts